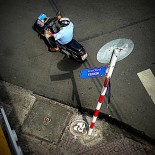 As I work on our “what we’ll miss checklist” (stay tuned!), I found some old thoughts/rants which I hadn’t plopped into a post.  So in a spirit of late-spring cleaning…

In general, my time in Asia has taught me that if the United States is the only country that does something, that something is probably not something to be proud of.  Not that U.S. doesn’t do a bunch of stuff fairly well, but not uniquely; much of the world does the same bunch of stuff (well-implemented freedom, decently-functioning capitalism, a solid dairy industry, et cetera).  But leading the world in incarceration rates and poorly designed currency?  No thanks.    Relaxing gun laws after a high-profile massacre? Really?  While we can drink the water in our rich country (contrary to what bottled water manufacturers want you to believe) international visitors are told to be careful and not break a leg (which can cost a visiting Brit a year’s wage).  You know what makes sense?  The metric system.  You know what doesn’t?  U.S. Customary Units.

But jingoistic sentiments aside (and the idea that “u” should be used less frequently than some other countries believe), there are a few exceptions to the rule.  The U.S. really does do a few things that other countries need to start emulating.  Pronto!

We live in an apartment complex with five residential towers, each with four or five large units on each of its 23 floors.  There’s also a huge hotel/office tower and a (mostly empty) mall.  And yet the only way to get to it is either by using the highway offramp from the east or using a muddy dirt road which is so narrow due to construction that cars have to crawl to avoid scraping their mirrors against the walls.  Who made these decisions?  What were they thinking?

And yet, whoever  thought: “I’ll build a huge complex over here without waiting for the infrastructure to catch up” got the job done and, against what some ordinary American would think, it works.  We live there.  The apartments are bustling (if not the mall).  In a country where an empty lot with trash tangled in the overgrown weeds turns into a five story glass business complex in between my sporadic jogging schedule, people put up some things first-worlders just plain wouldn’t.  Will that apartment complex be even close to filled?  Possibly not.  But the labor was cheap so perhaps they have a bit more leeway than in the West.  Will someone need to demolish a few floors for use of a different purpose?  Perhaps.  (In a coworkers huge residential complex workers jackhammered three floors of the empty mall to put in a movie theater, all while people lived above it.  I really appreciate that I can hear and not experience that story.)  This place is nothing if not adaptable.

As I’ve written before, five minutes into seeing Vietnamese traffic for the first time I was convinced I would see a crash before we reached our inaugural hotel.  All four I’ve managed to see the 22 months since have been fairly minor.  Some in the bicycle rights movement praise a small streets model which does away with separating pedestrians, cyclists, and vehicles in some areas.  The idea that everyone is forced to acknowledge everyone else and cars do not drive fast.  This is pretty much the model of many streets in my adopted country, and was (and continues to be at times) insanely frustrating but has become inspiring as well.  It looks completely chaotic and yet it works pretty darn well.  It is a grass-roots system which is not governed by outside laws but by common custom.  Everyone is responsible for what is in front of them (regardless of what it is), and if you want to get past something you need to let it know you want to pass.  Loudly.

All of this seemed so frustrating to someone used to an orderly way of doing things.  But no one is getting anywhere when everyone is sitting at a red light.  The Vietnamese traffic system, like it’s seemingly nonsensical construction boom, just gets things done.  It all reminds me how set in our ways we are back home.  While I have a new found appreciation for quality and getting things done right the first time, I can (at least, logically, if not emotionally) understand the reasoning behind doing it quickly and fixing it later.

In an effort to insert some pics after a word-heavy post, here’s a quick tour of a few Saigon’s landmarks!  We’re going to miss walking past these beauties whilst wandering around downtown Saigon. 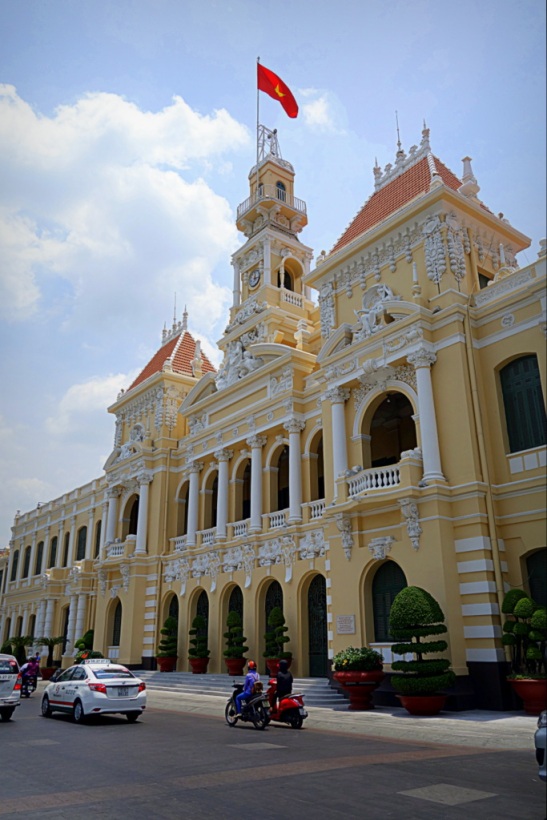 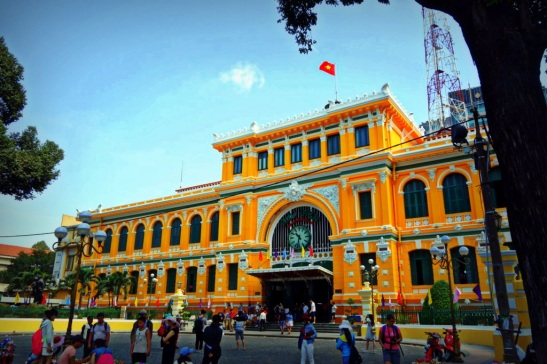